The history of the word "ok", as told by the gregarious glossators down at dictionary.com:
http://dictionary.reference.com/etymology/o.+k.?qsrc=3086
Posted by Blake at 7:18 PM No comments:

While the main agenda of this site is to inventory and salute magical items in literature, mythology, and pop culture, I also want to take some time to appreciate the innovations in Fantasy's sister genre, science fiction. While the protocols of these objects and their respective genres are very different, their aim is at their core the same - to speculate and revel in the wonder of invention.
Today's Science Fiction Device is the Box from Shane Carruth's ultra-low-budget science fiction film, Primer. I am a big fan of this film and its commitment to mundane reality, which adds amazing weight to its commentary on the ethical complexities of meaningful innovation. If you've never seen Primer, it's about two software engineers who set out to improve on an existing idea for a machine that will inhibit the affects of gravity on objects, but accidentally discover time travel instead.
The time travel device, per the non-flashy convention of this film's aesthetic approach, is a simple, grey, metal box. It appears to be made of sheet metal, plywood, and pvc pipe and contains palladium that the characters salvage from the catalytic converter of a car.  I won't say more, since the film is built around explaining the science of this box and the ramifications of using it, but let's just say that science, my friends, even speculative fiction low-budget film science... is fucking crazy. 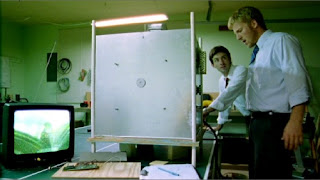 And if you like fucking crazy science and its philosophical implications, you should check out the Primer Official Forums. It isn't really active anymore, but wow, what a fan community. Physics hobbyists got real on that shit. And I imagine that given you're the kind of person who likes to read this blog, then you might also be a brilliant fucking scientist. So chew on the sweet, sweet fat of this archived meeting of minds, and thank me later.
Posted by Blake at 3:53 PM No comments:

You love this god damn song. And this song loves you!
Posted by Blake at 5:24 PM No comments:

1983's Krull is an unusual and underrated film about the alien invasion of a fantasy world and a prince's attempt to stop it. The weapon he employs in his endeavor is known simply as "The Glaive" (although it is not technically a glaive:) 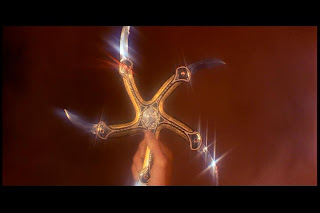 The Glaive is a large throwing star like weapon with 5 protruding curved blades. It spins as it glides through the air, and it seems that its controller can will its course. The protagonist of Krull, Prince Corwyn, obtains it, with the guidance of Ynyr the Old One, by climbing into a volcanic cave on the side of a mountain. He reaches into what looks to be either boiling water or lava to get it, but his hand is unscathed.


Would you stick your hand into lava for the glaive? Would I? Yes, I would, and that's what makes me qualified to write this blog.

Artifacts. Relics. What are your favorite magical items, and from what universe?

An obvious example would be the Black Sword Stormbringer from Michael Moorcock's Elric stories. Stormbringer is a being of a race of demons that take the forms of large black blades with red runes etched across their surfaces. It hungrily drinks the souls of those it cuts, and despite its need for a wielder it has a mind all its own.

Here is Robert Gould's interpretation of the sword (from his cover art for Stormbringer, the last novel in the core Elric series by Moorcock): 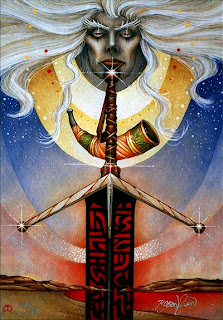 That is some prodigious and beautiful shit, Robert Gould. This was illustrated in 1977 - do you think it influenced the tendency towards impossibly large weapons, most notably in anime and manga, that started (by my estimate) in the 90's and continues on today?

Thanks for visiting my blog. With it I intend to write about things I love; the music I listen to, the films I watch, the books I read, the games I play; but most of all, its intention is to celebrate the strange and wonderful tools of speculative fiction.
Posted by Blake at 11:47 PM No comments: